IS IT WHISKY OR WHISKEY?

Spelling – what’s with the different spellings (whisky or whiskey) when talking about types of whiskey? Neither is wrong, unless you are regionally biased. Different regions have different historical spellings.

Here’s where the main 5 whiskey types come from. 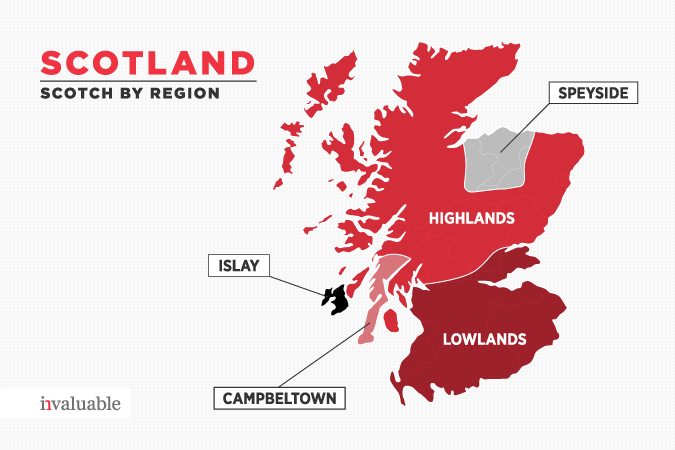 To receive the honour of being called Scotch, the drink must be made from malted barley, be aged for no less than three years and made in Scotland.

1. Lowland – Only three distilleries are still in operation: Glenkinchie, Bladnoch, and Auchentoshan produce the lightest and most mild-bodied scotch.

2. Highland – The Highlands cover the largest geographic area of the five sections. Categorizing the taste is more difficult given the number of Highland distilleries in operation, but they tend to be light, fruity, and spicy.

3. Islay – Islay has eight distilleries known for their smoky, peaty taste. They also tend to have a briny taste due to the surrounding sea.

4. Speyside – Named for the River Spey that cuts through it, this region is home to over half of the Scottish distilleries. Scotch from Speyside is known to be the most complex with sweeter tones and a rich taste.

5. Campbeltown – Campbeltown has a similar taste profile to Islay with heavy influences from the sea. Only three distilleries still operate in this area: Glengyle, Glen Scotia, and Springbank.

Something that separates a few American whiskey varieties from European styles, is that they are aged in new charred oak barrels. American whiskey is sweeter, less smoky, and less peaty than Scotch and Irish whiskey.

1. Bourbon – Whiskey must be made of 51 percent corn mash to classify as bourbon. Famously, bourbon is produced in Kentucky but is now made from coast to coast in states like New York, Indiana as well as California.

2. Tennessee – While similar to Bourbon in terms of grains used, Tennessee whiskey it goes through charcoal filtering to mellow the flavour during fermentation and aging.

3. Rye – By definition rye whiskey must be at least partially composed of rye mash and distilled to no more than 80 percent alcohol by volume.

4. Wheat – Wheat whiskey is made of 51 percent wheat mash.

Traditionally, Irish whiskey is triple distilled in a copper pot versus the double distillation popular in Scotland. Whiskies in Ireland are divided by classifications.

1. Single Malt – Single malt is made completely from malted barley in a single distillery.

2. Grain – This is lighter in style, made with corn or grain and produced in a column still.

3. Single Grain – Single grain are made on a column still of one or a combination of grains like corn, wheat, or rye.

4. Blended – The most popular of the Irish whiskey categories, blended whiskey makes up 90 percent of production.

Initially rye was one of the few crops which could survive eastern Canada’s harsh winters.

1. Must be mashed, distilled and aged in Canada.

2. Must be aged in small wood for not less than three years.

3. May contain caramel and flavouring.

Japan’s distilleries were first modelled after the Scotch whiskies and are produced much in the same way. There aren’t a ton of Japanese distilleries, but the ones they have are quite good.

The flourish of Japanese whisky industry has been largely attributed to its two founding fathers: Shinjiro Torii and Masataka Taketsuru. Shinjiro established the Suntory brand, founding the first distillery in Japan in 1923, Yamazaki in the Vale of Yamazaki. Taketsuru founded Yoichi on Hokkaido eleven years later.