In 1880's, officers of the British Navy were paid a portion of their wage in gin and nowadays we enjoy it as a G&T with friends.

The History Of Gin

Although some say gin originated in Italy, the British owe it all to Holland in the 17th century. At that time, gin was sold in Dutch shops as a medicine to treat ailments such as stomach complaints and gallstones, and flavoured with juniper, a berry said to have its own medicinal properties. In Dutch, juniper is known as jeneverbes, which gave the “medicine” its Dutch name, jenever. British troops fighting the Thirty Years war in the Low Countries were given warming tots of jenever to ward off the effects of the damp conditions. This process gave us the expression “Dutch courage”, and saw British troops reduce the name from jenever to gin. 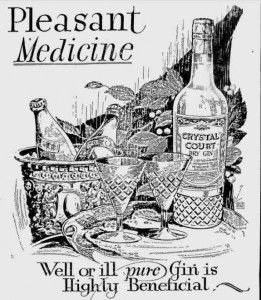 When William of Orange took the English throne in 1689, he encouraged the rise of British distillation, passing a series of statutes that restricted imports and made it far easier to produce alcoholic spirits. All too frequently, however, this resulted in spirits of very dubious quality. Gin consumption boomed across the nation, particularly among the poor. It became so popular, in fact, that gin sometimes formed part of a worker’s wages.

By 1730, London alone had over 7000 spirit shops: some reports suggest that gin was distilled and sold in as many as one fifth of all London homes. This excessive and uncontrolled consumption – known as the Gin Craze – provoked a rapid degradation of society. Something had to be done to curb this “social evil”.

That’s why, under the reign of George II, the 1736 Gin Act was introduced. Its aim was to restrict production and the sale of gin by imposing an annual levy of £50. By the time the act was repealed in 1742, only two distilleries had agreed to pay this tax.